It’s ironic that in my last blog I talked about fixing things, as approximately 3 hours later my laptop imploded after a graphics card failure. So I’m late again, apologies, but I have a pretty good excuse this time! Here’s my review of Twenty Twelve, masterfully titled Twenty Thirteen.

When I last wrote in Twenty Twelve I had just started working with Lesa at I Heart Buttons. She was just setting out on her quest for button-domination and she felt it was time for a bit of a re-brand and a new site to showcase her range of button bouquets and accessories. I helped her to come up with some new logos and a website that I felt reflected the style and quality of her work, which was a bit of a learning curve for me as at this point I had only ever designed my own site and didn’t have a great deal of experience developing for others.

I’m very grateful to Lesa for trusting me with the build, and happily the site has been a massive success! Lesa’s button empire has grown considerably since we first met early last year, and the site has grown with it as the content management system behind it allows for new pages and content to be added quickly and easily. To match the site, I also designed a brochure that showcases a handful of bouquets from her range, which also proved popular with brides looking for something special for their wedding day. There’ll be more about I Heart Buttons later, but first I need to tell you about hedgehogs.

Around Easter I received an email from an author with an idea for a children’s’ book about a hedgehog who lived in an enchanted land. She was looking for someone to create a map of the enchanted land based on her description, and of course I jumped at the chance. Most of the work I do these days is basically graphic or website design but illustration is my first love and I’ll never turn down an opportunity to doodle! The author was so pleased with the finished map that she also asked me to have a go at drawing Egel, the main character of the book. I was a real challenge to capture on paper a concept originally conceived and nurtured in another persons’ mind, but it was also a lot of fun and we were both very pleased with the final illustrations. 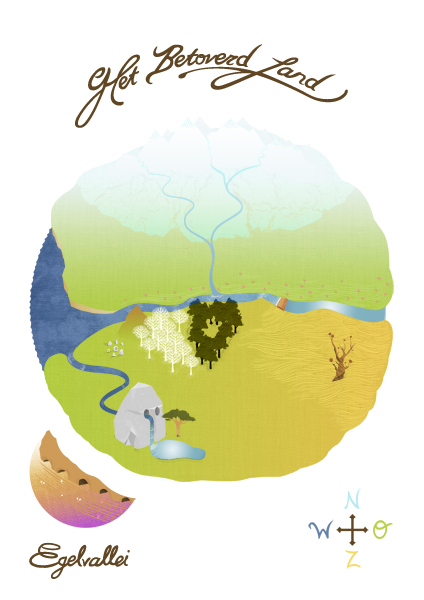 In summer came an opportunity to further improve my web-design skills when I took a commission from hairdresser Arron O’Halloran. Arron needed a website with integrated blog where he could post style advice and inspiration for his clients, and Arrono was the result! Go take a look, book a trim, he’s very good.

Finally we’ll take a look at my first project of the new year, which takes us full-circle back to I Heart Buttons! Lesa has come up with a brilliant new idea for 2013, designed to breathe new life into the humble buttonhole and get us blokes more involved in the wedding planning process, as well as encouraging men to brighten up their boring old suit with a button-boutonnière. I was asked to develop a new site and branding for the venture, named I Heart Buttonholes, and used all of the knowledge gained since designing the original I Heart Buttons site in early 2012 to make it a site to be proud of. Click on the logo below to explore the new site!

Well that brings us up to date. It’s customary at this point to set a resolution for the year, but this year I don’t think I’ll bother. I’ve never liked the number thirteen you see, it’s reputation for being unlucky is a massive cliché, but whether it’s a trick of the mind (if you expect bad to happen, you’ll find a bad thing happening) or the result of a superstitious upbringing it really has brought me bad luck over the years. 2013 is the only year I’ll ever see that ends in 13, so if I’m going to have one terrible year if my life I’ve decided that this is likely to be it. If I make it to 2014, that’ll be good enough for me!

This entry was posted on Thursday, February 7th, 2013 at 12:37 pm and is filed under Illustration. You can follow any responses to this entry through the RSS 2.0 feed. Responses are currently closed, but you can trackback from your own site.