Hey everyone! I hope your year has been good so far. We’re about a quarter of the way into 2012 so I thought it was high time for an update, especially since the skies are brightening up and I’ll be an even lazier blogger when summer arrives to coax me from my hibernation-hollow.

Looking back to Christmas, I completed the 2011 Jenkins Marine Christmas card. I started working for these guys in my last year of university, when we were set a professional practice project and had to bag ourselves some real clients for the first time. Since then it’s become a weird but wonderful Christmas tradition to illustrate a tug or a barge or a dredger and produce a nautical yet festive illustration for their annual card. Thankfully I was brought up in a little fishing town and as a kid I used to draw the boats in the harbour, so I have plenty of experience when it comes to maritime doodles!

I also took some time out for personal work and designed a Christmas card of my own. Entitled The First Supper, it is a loving parody of The Last Supper by Leonardo da Vinci. This was also featured on Illustration Rally’s Christmas Rally, which was pretty cool. 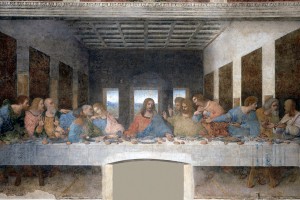 Aside from the Christmas stuff, I’ve been doing some more work for Lesa at I Heart Buttons. She wanted a sign to promote her new shop in Ryde on the Isle of Wight, where she sells many pretty things from button bouquets to vintage Betty Boop memorabilia. I thought it would be a nice idea to combine those two things on the sign with an illustration of Betty holding a button bouquet, and we were really happy with how it turned out.

It was also nice to be able to go and see a physical manifestation of my work, happily doing its’ job on Union street outside the I Heart Buttons Shop. I’m so used to only seeing my work on a screen that it comes as a surprise whenever I encounter it somewhere else!

Until next time, thanks for reading!

This entry was posted on Sunday, March 11th, 2012 at 4:51 pm and is filed under Illustration. You can follow any responses to this entry through the RSS 2.0 feed. Responses are currently closed, but you can trackback from your own site.